Uses and Benefits of Frankincense

iunie 27, 2017
An interesting article about the Frankincense Benefits and Uses; worth reading it.

Frankincense has many benefits; no doubts about it. This therapeutic essential oil also known as Olibanum oil is used for calming the environment and also for soothing the body, mind, and soul. Frankincense oil they say originated in India, Africa, and the Middle East and is found to have great potential as an alternative therapy for bladder cancer.

Frankincense plays a significant role Christianity, being among the gifts the newborn Jesus was offered by the three wise men. Nowadays, this aromatic resin is turned into an essential oil valued not only in the religious rituals but also in natural health and aromatherapy as stated above.
It is used in body lotions and creams due to its wonderful antiseptic properties for healing the skin. It rejuvenates mature skin to look young and fresh again; it helps to improve tautness of the skin and also enhances the skin tone.

There are several uses of Olibanum oil offering a lot of benefits. This is very useful for clearing bronchitis, cold, coughs and sets right voice loss due to tonsils in vapor therapy.

It helps reduce anxiety and other disturbances in mind bringing on internal peace.

Frankincense oil is used in bath oils and massage blends offering a soothing after bath experience. Works as a good astringent to help tighten the skin for reducing the signs of aging and also heals sores, wounds, and ulcers of the skin.

Due to its antiseptic properties, the therapeutic Frankincense oil is used as a skin wound cleansing lotion and is known as the best healing agent across the globe.

Therapeutic method in Europe and Asia

Frankincense, a sweetish substance with pleasant and aromatic odor, develops this aroma well only at the temperature of 100 ° degrees C when it softens without melting. It has anti-inflammatory, antiseptic, astringent, carminative and healing properties, diuretic, expectorant, sedative. Contemporary science can not explain, for example, the extraordinary effects of Frankincense fumigations in the treatment of epilepsy, sensory disturbances, or serious psychosis, but there are numerous records of the extraordinary effects of this process. In the Arab world, Frankincense is dissolved in water and used for stomach pain. For respiratory infections it is burnt on charcoal, enhancing the fragrance. Also in oriental medicine, reddish yellow Frankincense is used as rejuvenation for the psyche. In Europe, incense was used until the middle of the nineteenth century to alleviate rheumatic pain. Modern medicine seems to rediscover it in cancer therapy, dysentery, and fever.

The health benefits of incense oil are mainly attributed to its anti-inflammatory, astringent, antiseptic, disinfectant, digestive, diuretic and expectorant properties. It also has effects dressings, carminative, Cytophilactiques, Emmenagogue, vulnérants and have effects on the uterus.

Incense oil is considered a fortifier because it benefits all systems of the organism, including digestive, respiratory, nervous and excretory systems. It also promotes nutrient absorption and strengthens your immune system. Incense oil has been shown to be effective in the treatment of the following health problems:

What Are Frankincense and Myrrh? 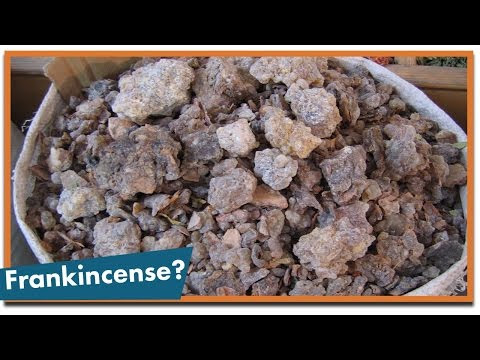 A nice clip about Frankincense